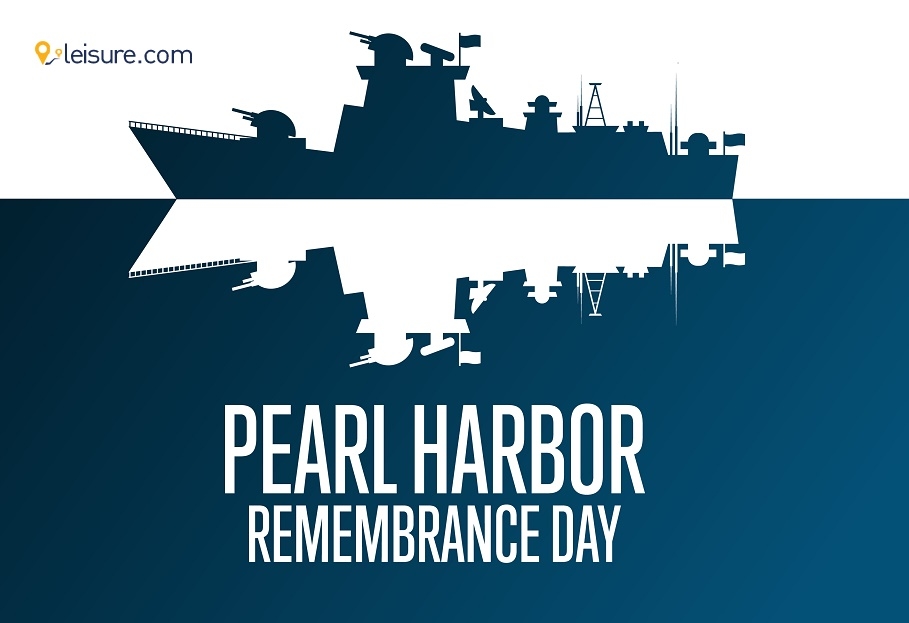 Pearl Harbor is a picturesque lagoon in the Hawaiian Islands and is often referred to as a gleaming gem in the state. This harbor serves as the headquarters of the United States Pacific Fleet and has played an essential role in American naval presence in the Pacific Ocean since 1887. At that time, little did anyone know that an attack at this harbor would draw the full strength of the American military into a conflict it was trying to avoid. In 1941, the Japanese army attacked the harbor and led the United States to enter World War II.

All the lives lost during the attack are honored on the occasion of Pearl Harbor Remembrance Day that takes place every year on December 7. It is a national observance day in the United States to honor the memory of Pearl Harbor victims. Although it is not a federal holiday and government offices, schools, and businesses open up at regular timings, several Americans and people from all over the world gather together and participate in various ceremonies and events. To know more about National Pearl Harbor Remembrance Day, read this article. We believe that this article will turn out to be a helpful resource for you to expand your knowledge.

An attack took place on Pearl Harbor on a Sunday morning, i.e., December 7th, 1941, initiated by the Imperial Japanese Navy Air Service. They attacked the American Army and Naval Station Pearl Harbor near Honolulu, Hawaii. It came as a surprise for both navy and army when Japanese fighter planes led an air raid on Pearl Harbor. It resulted in a massive loss of lives and equipment that killed over 2,403 Americans and injured 1,178 others. Along with this, four U.S. Navy battleships were sunk, and four were damaged. Also, three cruisers, three destroyers, one minelayer, and 188 aircraft were crippled in the attack. Not just the Americans, over 60 Japanese servicemen were also killed or injured, and five submarines and 29 aircraft were lost.

The attack at Pearl Harbor continued for 90 minutes and was incredibly devastating. The intelligence was gathered at the harbor after that attack. They found out the purpose behind the attack was to seize the island and prevent it from being utilized as an American base of operations. The Japanese believed that by launching the assault, they would cripple the US Pacific presence and be able to rule the seas unfettered. Soon after the attack, the United Nations declared war on Japan, which led to the escalation of World War II.

December 7, 1941, became one of the most infamous dates in the history of the United States, and President Franklin D. Roosevelt called it “a date which will live in infamy.” National Pearl Harbor Remembrance Day is being observed to remember the American patriots who died on their duty at Pearl Harbor. The US Congress in 1994 officially declared December 7 as National Pearl Harbor Remembrance Day, and former President Bill Clinton signed a joint resolution on August 23, 1994.

Why Do We Observe National Pearl Harbor Remembrance Day?

The attack on Pearl Harbor indisputably changed world history. We observe National Pearl Harbor Remembrance Day in honor of all the people who fought for their country and the people who stayed home but supported their nation in tough times. There are different reasons why it is crucial to remember the day and observe it every year. Here are some of those reasons:

During the attack on Pearl Harbor, the United States was in peace talks with Japan. Hence, the attack came as a shock for everyone. During this tragedy, thousands of people were killed and injured, and hundreds of planes, ships, or aircraft were damaged. This makes it one of the worst attacks that ever took place on American soil. Because of this reason, we should honor everyone who lost their lives on this tragic day.

Japan’s attack on Pearl Harbor was an attempt to damage the Pacific base and borrow time to conquer what they called the Southern Resource Zone. Until then, the United States was adamantly opposed to engaging in a major war and prevented itself from entering World War II. But this attack was seen as a catalyst that led the American people to unite into a call to war. This is another reason why December 7, the date of the attack, was chosen as National Pearl Harbor Remembrance Day and is observed every year across the States.

This is undoubtedly one of the major reasons why the celebration of Pearl Harbor Remembrance Day is considered essential. The observance day is an excellent opportunity to reflect on the tragedy that the service members faced in the attack as well as on a daily basis. With thousands of men and women being deployed to protect the country, honoring them is a matter of national pride. Observing this day ensures their actions, struggle, and sacrifice will always be remembered.

There are multiple ways to observe Pearl Harbor Remembrance Day. Being a part of the day is an opportunity to show support to all the veterans who are alive and show respect to those who sacrificed their lives in the service of their country. There are many ways to observe this day in the United States. Some of them are given below.

One of the best ways to be a part of the celebration is interviewing a veteran. Recording the story of people who lived through or survived the bombing is a chance to hear their experiences and share them with future generations.

- Pay A Visit To Pearl Harbor

National Pearl Harbor Remembrance Day is a great chance to pay a visit to Pearl Harbor. Visiting it and being a part of the events is a great way to honor those who lost their lives. However, if Hawaii isn’t a feasible location for you, you can visit any memorials near your location.

Pay your respects and honor the armed forces by sending a care package. On the occasion of National Pearl Harbor Remembrance Day, you can find any armed forces benefit organization and ask them to send a care package for soldiers who are living thousands of miles away from their families.

- Learn About The Pearl Harbor or Events That Took Place

You can spend time learning about Pearl Harbor and the events that took place in the aftermath. Thanks to the internet, one can easily find a lot of information about past events. This will help you take a deeper look into the war and what happened on this tragic day.

People in the United States will always be grateful for the sacrifices that were made on December 7, 1941. Several families suffered during the attack, and it’s our duty to honor the sacrifice they made. So, be a part of the National Pearl Harbor Remembrance Day and pay your tribute in the best way you can.