Fun Things To Do In The Everglades National Park

To many Americans, the Everglades are primarily associated with Horatio Crane's search for his latest, ill-fated body. While the 'Glades is probably an excellent site to dispose of unwanted human evidence, they're also one of the world's most beautiful natural vistas, a slow-moving river of grass that supports nine separate ecosystems. Aside from that, the Everglades remain a rough, untamed wilderness that few have mastered. It is a critical component of South Florida's survival.

All of Everglades National Park is under constant threat of encroachment, but the protected area is a magical place full of mangrove swamps, cypress forests, and sawgrass plains. For those in need of a momentary break from urban life, this is the perfect playground.

The Everglades may not be for everyone; however, some people have learned to maximize the benefits of this unique and delicate environment. Take a trip with us down Tamiami Trail and learn about all there is to see and do in Everglades National Park and the greater Florida Everglades.

1. Hike through a variety of ecosystems

Think of Everglades and think of alligators and pythons. Yes. But keep in mind that you're in a 1.5 million acre ecosystem with bears and panthers as well. Set your anxieties aside, lace up your muck boots, and go hiking through America's most distinctive biological communities. The Royal Palm Visitors Center, where it is located, has the most accessible strolls. The 8-mile Anhinga Trail meanders over a beautiful boardwalk, through lush grass, and over black water. The Gumbo Limbo trail, not far away, immerses you in the trees of the same name and feels nearly like strolling through a zoo's tropical biodome.

2. Bring a picnic to the Gator Hook Trail

If you travel to the far end of Loop Road, you'll see a sign pointing you toward the Gator Hook picnic area. A short but strenuous journey leads out into the Everglades from the picnic shelters, which are little more than a shady location to take in the ambiance of the river of grass.

The Gator Hook Trail is a five-mile trip that begins on an elevated limestone bed on an old logging tram. During the summer (aka wet season), the trail descends into the heart of the Everglades, providing a once-in-a-lifetime opportunity to travel through the murky, mysterious waters like old pioneers. During the dry season, you can travel the Gator Hook and keep relatively dry while exploring one of the Big Cypress Preserve's more untamed portions. None of this requires a park admission charge and can be completed in half a day from Miami.

3. When in Everglades; eat the stone crabs 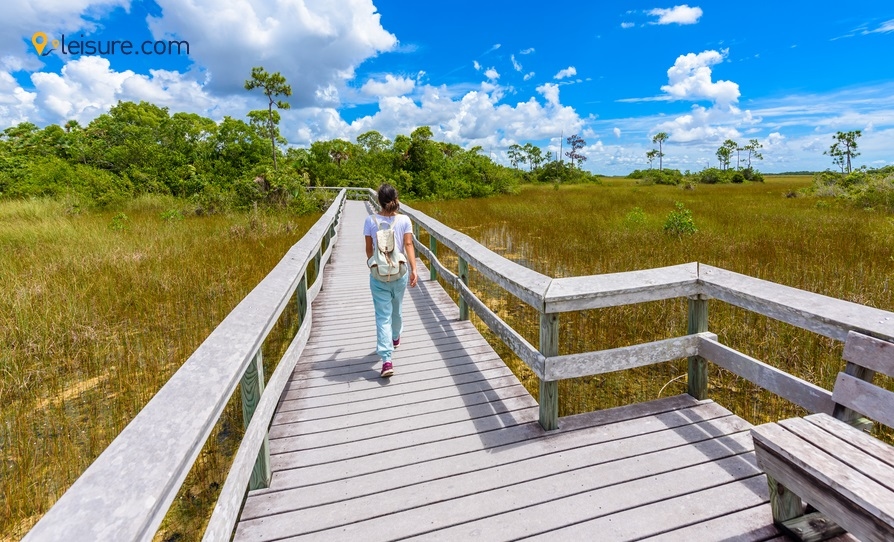 Everglades City is one of the most unusual places in Florida. It's a village of fewer than 500 people near the end of the Everglades that was nearly all indicted as part of the marijuana trade in the late 1970s. The city now earns a more genuine living as the state's stone crab fishing capital.

Instead of spending a fortune on claws in Miami, head to Everglades City for a beachfront meal with stone crabs fresh from the water and a riverfront canal vista. Some great options include City Seafood, Triad Seafood Market, and Grimm's Stone Crab.

Pro tip: Strike up a conversation with a native. You can count on a fantastic old Florida story.

The plethora of roadside signs enticing you to stop and see an alligator wrestling event will be your first indication that you've arrived in the Everglades. Though the programs are identical, the Miccosukee Indian Village is the most acceptable site. Stopping here not only supports the tribe in ways other than the casino, but it's also a once-in-a-lifetime event that allows for an excellent photo opportunity.

Snorkel or paddle in the other national park of the Everglades

Few realize that the Everglades ecosystem extends beyond its namesake national park and into Biscayne Bay and Biscayne National Park. The marine reserve off the coast of South Florida has a pristine coral reef, and the snorkeling is as good as, if not better than, diving anyplace else in the country. The waterways are exclusively accessible by boat, with trips departing from the Dante Fascell Visitors Center east of Homestead.

Once aboard, duck your head underwater and look below to experience this park that is almost 90% water. You'll see a vibrant world of tropical fish and spectacular coral, all safeguarded in a valuable marine sanctuary. It's a long way from the bogs of the mainland, yet it's a rarely-visited tropical paradise.

Driving into the Everglades, you'll be bombarded by billboards advertising airboat rides. While they're all worthwhile, don't rush in and pick the first one you come across. Instead, make your way to Jungle Erv's in Everglades City for the best rides in the state. As you may remember, Everglades City has a dark reputation as a marijuana smuggling hub. The town's fine inhabitants have paid their debt to society. They now use their deep knowledge of the black water back channels to provide the most comprehensive airboat tours on the lake.

We're sure you're tempted to book your next trip to Everglades, as we are! Leisure.com gives you a good look at the top places in the world, satisfying every traveler's itch. So what are you waiting for? Pick up your travel bags and get ready for an adventure.